How do you throw a casual holiday party for, oh, 250 people? If you’re Leslie Saeta, of Pasadena, California, you get a running start. She begins cooking about two weeks in advance, prepping the pastry shells and appetizers, laying the groundwork for the 20 types of hors d’oeuvres and seven kinds of desserts that will be served.

“I have an Excel spreadsheet, color coded, and I’m calm,” she says. Leslie started her holiday bash, beloved among her social circle, more than 20 years ago with 40 attendees, and though it’s grown exponentially, she feels she’d be “selling out if I hired a caterer. It’s my Christmas gift to my family and friends.”

Leslie’s home, which she blogs about at My 100 Year Old Home, was built in 1915 and has only been owned by two families. Her husband’s family bought it from the original owners in 1969, and then she and her husband bought it from his parents.

Three major remodels have reshaped the home, while always respecting the era and bones of the stately house. “Most people don’t believe that our kitchen is not original. We were very careful when we did the remodel to keep the spirit of the home,” says Leslie. Still, it needed to be modernized. “There was no dishwasher. I put in two, which was brilliant. We do love to entertain.”

Leslie is a serious flea-market fan, and most of the items in her house originated at flea markets. “I go every month at least twice a month. I love the Rose Bowl and Long Beach. I go up in Ventura, and I’ve been to Brimfield. When I go, because I’m an Instagrammer (@ my100yearoldhome), I film stories. Sometimes I’m at a flea market three times a month.”

She’s also an accomplished crafter and an award-winning professional artist who seems to effortlessly whip up things of beauty, which she shares with her fans on Instagram and via her blog.

It’s clear that family and home are exceedingly important to her. So, having served delicacies to 250 people at a Christmas party earlier in the month, what’s on the menu for actual Christmas morning at her house?

“My mom’s sausage egg casserole,” she laughs. “We’ve probably had that recipe for 30 years in a row.” Some traditions are simply too delicious to change. 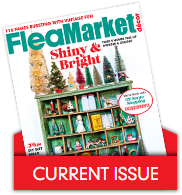